Dive Into Mayan Temples and Stop the Line of Colored Balls With Your Frog Shooter!

We're sorry but we are no longer able to offer this game.

In Zuma Deluxe, put your aim and matching skills to the test as you travel to the ancient temples of Latin America to save the Frog Idol and eliminate as many colored balls as you can.

Get 3 or more balls of the same color in a row and the track will shorten. Stop the track of balls before it reaches the end of the line or it's game over.

This takes some serious skills!

Don't get overwhelmed with the multi-tasking involved with Zuma Deluxe especially on the levels with multiple tracks. Just make sure you don't let the track of balls reach the Golden Skull or your game will be over.

Complete the 12 increasingly difficult levels and receive a special bonus level. Who knows where this level will take you?

You can interchange two available balls by simply right clicking with your mouse. Changing the color of your available balls will definitely get you out of those sticky situations.

There are four types of bonuses that appear randomly on balls, and can be rewarded by exploding the balls containing them.

Get some essential help with these fun bonuses and powerups.

Game modes for everyone

With 2 different game modes, adventure and gauntlet, the hardcore gamers can test their skills and beginners can learn to play.

Adventure mode takes you through a series of levels at ancient temples and gauntlet mode provides a endless stream of balls, see how long you can make it.

Fun for the whole family

With a simple and clean interface, Zuma Deluxe is great for the family. It's easy enough for children to master and complex enough to keep adults interested.

Kill your boredom with this dizzy adventure while also exercising your mind with the fast game play. Zuma Deluxe will test your hand-eye coordination, aim and strategical skills focus. Download Zuma Deluxe game now and have a blast!

Zuma Deluxe is an an exciting puzzle game with a unique Aztec theme. You must battle through multiple temples to find the secrets of the Zuma. In the game, a long chain of colored balls follows a path towards a golden skull. You've got to create matches of three or more balls and destroy the chain before it gets there, or it's game over. You can take on a variety of levels in Adventure Mode, or see how long you can hold out against an endless chain in Gauntlet Mode. Zuma Deluxe is simple enough for anyone to get the hang of, but still packs quite a challenge.

In Zuma Deluxe, you control a stone frog that sits in the center of each level. This frog fires different colored balls that are destroyed when matched in groups of three or more. There is a long chain of the same colored balls following a winding path throughout the level than eventually ends at a golden skull. Your goal is to fire the colored balls and create enough matches to destroy the chain before it reaches the skull. If you fail to do so, you lose a life and must start the level over.

Occasionally, some colored balls will randomly change and have an icon on them, indicating that they will provide you with a powerup when destroyed. Some powerups may slow the speed of the balls, while others can make them move in reverse. It sounds simple enough, but can present quite a challenge on later levels when the difficulty ramps up. 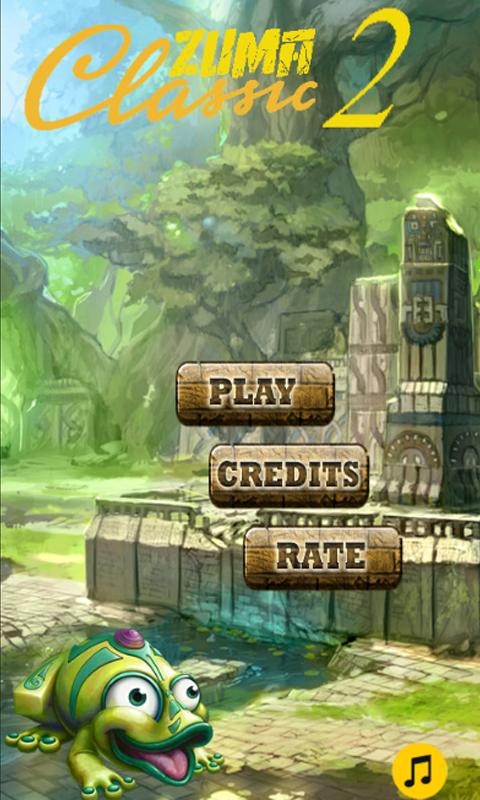 There are over 100 different levels in Zuma Deluxe organized into different temples and stages. Each temple has multiple stages, and each stage has multiple levels. Each level presents a unique path for the chain of balls to travel, and some even have two chains to deal with. Some levels take the path through tunnels you can't fire balls into, or a path that winds around the frog (blocking the outside part of the chain from your line of fire). The levels range from the simple and easy to the extremely complex and challenging.

The biggest downside is that despite the differences and changes that occur from level to level, there isn't much variety in the action.

Zuma Deluxe does provide two different modes of gameplay. Adventure Mode is the only one available at first. This mode takes your through the various levels and temples the game offers, which are then unlocked for the Gauntlet Mode when beaten. Gauntlet Mode has similar gameplay to Adventure Mode, but with a few changes. Rather than advancing through levels, you select only a single level to play on. You play your selected level with an endless chain of the colored balls. Your goal is to last as long as possible before the increasing colors and speed of the chain overwhelm you and finally reach the golden skull.

Should Challenge Most Players

The difficulty level in Zuma Deluxe starts low and continues to ramp up as you progress through the game. You start with slow moving chains on simple paths and only a few ball colors to deal with. As you beat levels, the speed of the chain and complexity of paths continue to increase (and some levels have you dealing with two chains, a challenging task). The number of colors you need to deal with slowly increase as well, with up to six different colors to manage. Unfortunately, Zuma Deluxe does not provide any options to change the difficulty level. Such an option would have been a nice addition to improve the game for players finding it too hard or too easy. However, the Adventure Mode should provide a good challenge for most players, while Gauntlet Mode can provide a tougher experience for more experienced or hardcore players.

Additionally, levels provide various bonuses (like coins) that aren't necessary to complete the level but will reward a large number of points. These bonuses can add another element of difficulty for that group of players.

Easy to Learn and Play

The controls in Zuma Deluxe are few in number and simple to use. You turn the stone frog to aim balls using the mouse. You fire the balls with a simple click. The frog holds two balls at once, often two different colors. You can switch between these two balls using the Right Mouse button. Those few controls are all you need to know to begin your Zuma experience.

Zuma Deluxe does a great job when it comes to presentation and the theme. The visuals all fit well in the Aztec motif. The background art for temples, the designs on the stone frog and colored balls, and even the golden skull all help build a consistent and immersive theme. The music and sound effects also fit perfectly. There are also sound cues that let you know when something is happening. The sounds will get louder as you eliminate multiple groups of balls in quick succession. Other sound effects will alert you when you get a bonus or powerup. When you put it all together, it is a great experience.

Conclusion - Ease of Use and Addicting Play Make This a Winner

Overall, Zuma Deluxe is an excellent game. There are a ton of levels to take on that provide a variety of challenges. The controls and gameplay are simple enough for anyone to pick up and play. Multiple modes provide different experiences and types of play. Working towards bonuses or grabbing powerups adds to the excitement. Great presentation makes an already great game even better.

There isn't a great deal of variety when it comes to the action, but that's not unusual for this type of game. The minor flaws and annoyances pale compared to the positives of Zuma Deluxe. Whether you're a puzzle player or not, don't hesitate to give Zuma Deluxe a try.

Game players from around the world play tens of thousands of DFG’s free games every day. DFG is constantly expanding, striving to bring its audience the most entertaining game downloads found on the Internet.

Download Free Games is a small business owned and operated by iWin Inc.

Thank you for your review!

Your review will be published within 24 to 48 hours.

Sorry, there was an error whilst submitting your review!